The Royal Town, Tripunithura located in the midst of Kochi, situates largest archaeological museum in Kerala – The Hill Palace Museum.  The palace built in 1865 was the former residence of the Kochi Royal family and is situated close to the outskirts of Kochi. A vast and amble 52 acres of the land contain about 48 building structure that comprises the Royal Palace. Noted for its terraced landscape dotted with ponds, fountains and lawns, the palace currently houses a full-fledged ethno-archaeological museum and has been titled Kerala’s first ever heritage museum. At the Thripunithura Hill Palace, you would come across the oldest building in the palace complex, which is a single-storeyed Kerala style ettukettu constructed around 1850 AD. Close by this structure are a pond and a temple.

The most enthralling feature that augments the interest of the tourists is the Crown Gallery that exhibits the Royal Crown of the King. With its matchless architectural work which is a blend of both the traditional and western styles and admirable pieces of the past, the Palace renders a visual treat to the eyes. Entering into this majestic edifice brings those scents of the royalty, the tradition and offers a very closer look to the historic background of the Royal Town. The 200 antique pieces on display are  of great interest. They comprise pottery and ceramic vases from China and Japan, Kudakkallu (tombstone), Thoppikkallu (hood stone), menhirs, granite, laterite memorials, rock-cut weapons belonging to the Stone Age and wooden temple models. The museum is also noted for its great collection of plaster cast models of objects from Mohenjo-Daro and Harappa of the Indus Valley civilization. A gallery of contemporary art is also part of the museum here. One of the interesting galleries in the museum is the Weapon and Sculpture gallery. Old weapons collected from different places and stone sculptures ranging from 10th century up to 18th century can be found here. And in the Bronze and Metal ware gallery, rare bronze and silver items from a period between 14th and 16th century are displayed. The gallery for Porcelain has for you about 160 items that include porcelain or pots, Chinese dishes and cups.  The gallery for Chariots displays horse drawn coaches imported from England and formerly used by the Maharajas of Travancore. The Palace gives you a thorough and quick impression about the past of the Royal City. 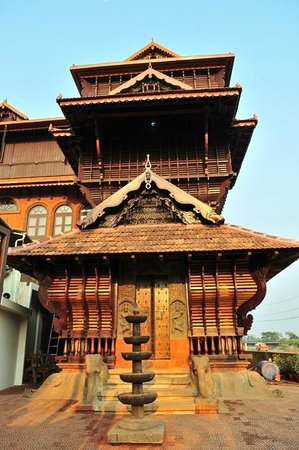 Located in Kochi ‘The Kerala Folklore Museum’- a magnificent edifice represents the cultural tradition of South India and stands to reincarnate the past. This marvellous three storied structure gives the scents of the times gone by, the culture and the heritage that Kerala exudes through its numerous and enchanting dance and art forms.  Entrance to this structure is quite delightful and is the remnants of a 16th century temple in Tamil Nadu.

The entrance door is decked with an attractive manichitratazhu (a traditional ornate door lock of Kerala).  Adorned at the top with the 19th century epics culture of Yasoda and Krishna and

representing the mother-child bond. The pillars at the entrance bottomed by the side stones of the sopanas and the steps of the sanctum sanctorum of a temple render a ravishing beauty to the whole of the Museum. The building is a piece of wonder, with its three floors inspired form the architectural methodology of Malabar, Cochin and Travancore. It incorporates the diversities in the state. Inscriptions on stones from 16th century Kanchipuram in Tamil Nadu narrating the story of a temple in Sanskrit and Tamil and Telugu are featured on the walls of museum premises. The architectural excellence of the structure is in many ways irresistible for the visitors to not have their mind engrossed behind the beautiful structure.

Opened in the year 2009 as a non-profit organization, the museum is truly a treasure trove that showcases the rich heritage of Kerala. The museum houses about 5000 precious pieces of the past. The museum has been listed along with the important places of interest and has a position in the Limca Book Of Records. The architectural excellence inspired and the alluring past of the cultural background of Kerala, makes your affection quite deep with the state. Located a little distance from the crowded urban centre of Ernakulam is a quiet ethnic building hidden in the shades of huge trees. A statue of Parasurama, the sage who is said to have created Kerala, greets the visitor. This is a monument to the history of Kerala and homage to its makers. The Madhavan Nayar Foundation also called the Museum of Kerala History and its maker’s showcases historic episodes from the Neolithic to the modern era through life size figures.

Light and sound shows are regularly organised with commentaries in English and Malayalam. There is also a gallery for paintings and sculptures, displaying over 200 original works by contemporary Indian artists.